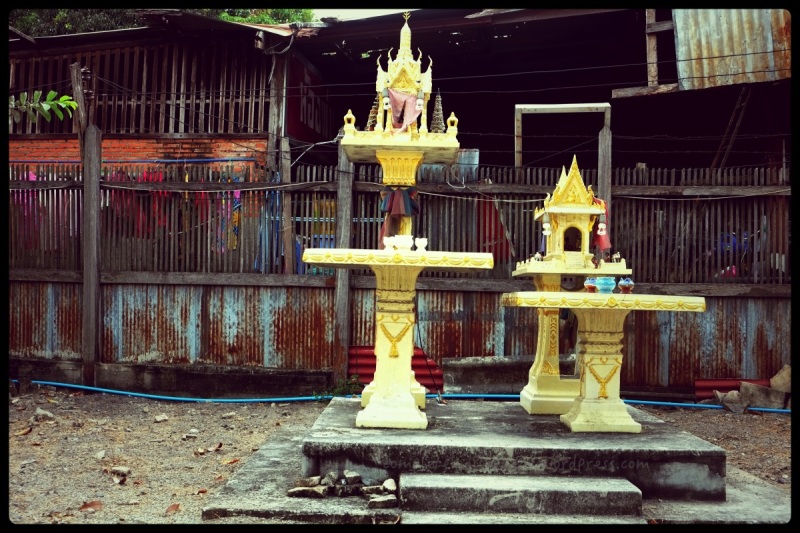 This photo was took at my grandma’s home when I visited her yesterday (22-Mar-2014). Those who never be here in Thailand might not know what this is. The small building acts like the house of spirit. Some Thai people believes that there are spirits who has been taking care of their homes so they need to pay respect by building a house for those spirits. My home doesn’t have this one but our grandma’s house has.

We called this in Thai word as ‘Sarn’ (Shrine) which is the same word as ‘Sarn’ (Court). Speaking of court, I stopped writing about Thailand’s political situation for a while as we could pass the National’s Election day without so much violence even though there were bombs in some area during the following weeks. I therefore didn’t thought I would bring this topic back to my writing on Sunday so soon. However, there was a news that decreased the peace of my mind immensely. The constitutional court of Thailand ruled that a general election in February 2014 was invalid which voting result as 6:3.

They claimed that some voting stations couldn’t open to vote resulting this invalid election. Nevertheless, those stations couldn’t let the voters in because they were in the area dominated by demonstrators who have been trying to sabotage this election. So I felt like the court’s decision did’t look for the fact that there were a vast number of voting stations that could succeed the election. There were about 20,000,000 Thai people who walked out of their home to the voting stations even though they felt fear for their safety as they might have encountered some violence from those who disagreed with this election.

I felt like I have been betrayed by their decision to rule out the election February. My voice has been violated by this. My rights to vote has been ignored all over again.

Only those who have been supporting the demonstration in Thailand are the one who have their voices to dictate how Thailand will go in the future. I, myself, as a Thai who always believe in doing the right thing, follow the laws, respect other people’s voices, and never insult others based on their educational background, be just a voiceless person who was born and no other choices but living in this country. I have been living in lies that this land is mine. Hell, no it isn’t. And that I will keep in mind to remind myself that I should stay low and let all high and mighty people do what they want to do with this country.

I hope I can do that.

One thought on “Injustice”